I’m up early this morning and Lucy is still sleeping so I thought I would try something new and post a blog from the tent! We’re about 25 miles outside of Salida, and will be having a short day tomorrow, but towns are less frequent here so I thought it was time for an update. Also I apologize if you received an email about another blog post that went up, in my morning grogginess, I accidentally published an old draft. 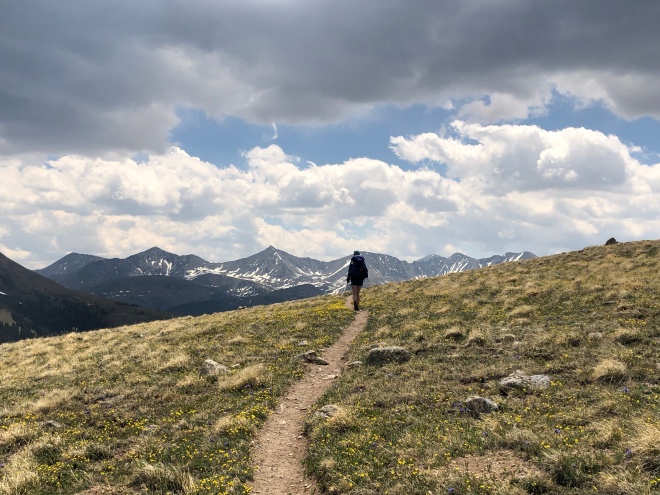 We were promised more snow, and that is exactly what we got. Departing Frisco we were warned of other hikers who had attempted to traverse over Ten Mile ridge and needed to turn back. So very cautiously, with the most up to date snow report we could get, we began our journey onward and upward. Somewhere 8 miles into the day at just over 10,000 feet we began to encounter the first patches of snow, soft and mushy, causing a considerable amount of post-holing. 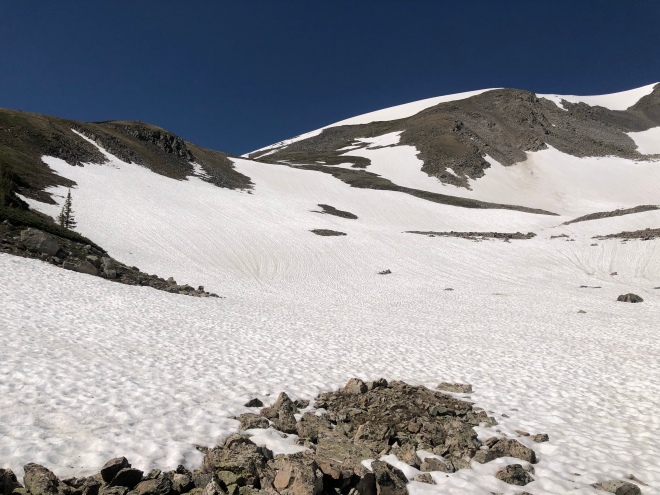 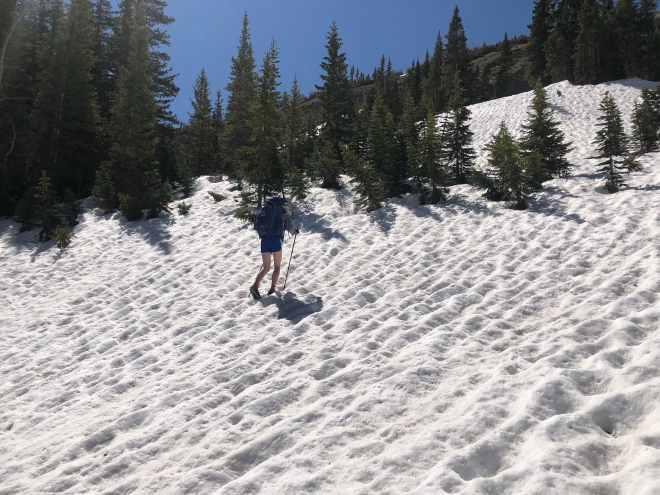 Over the next few miles we broke tree line and encountered the first of many long snowfields. Some steep, necessitating kicking steps into the snow, and others that were level, but required care with every step so as not to slide down the side of the mountain. This has also created some very impressive cornices to be weary of.

The journey across these snowfields continued up and over Searle Pass the next day, up onto Elk Ridge and through Kokomo Pass on the other side.

Spotty snowfields dotted the high alpine environment like a large mountain Dalmatian. Much of it could be avoided, but at other times you found yourself falling up to your hips through the high snow drifts. 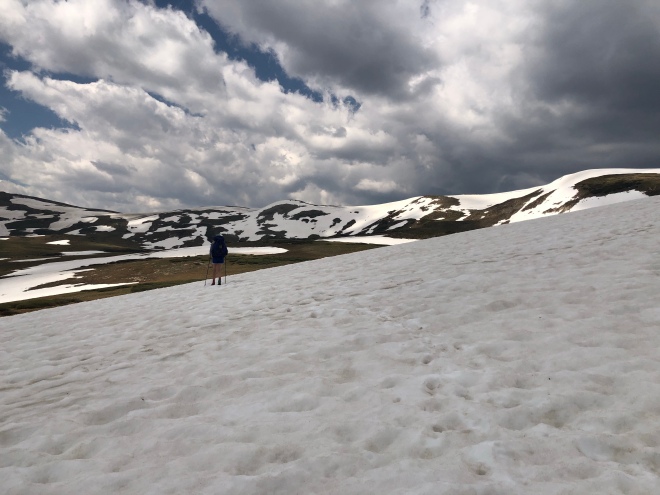 Particularly interesting on these ventures over higher altitudes are the marmots that call this habitat home. Marmots are the heaviest member of the squirrel family and live in high mountainous regions across North America, Europe, and even the Himalayas. A high pitched whistling is often the first sign that marmots are near, their alert system to one another that a human or other animal is approaching. This allows the others to communicate while also seeking shelter in their burrows which are comprised of a complex set of tunnels dug into the earth. Marmots vary in size depending on species and season, becoming heavier in the autumn to prepare for the cold winter ahead. In the true definition of hibernation, marmots are the largest animal that hibernates (bears are driven to hibernation from environmental clues, not at the exact same time each year).

Although adorable to stop and look at, one other aspect that has commanded swift travel over the higher altitude ridges and passes is the increased frequency of afternoon thunderstorms in Colorado, often accompanied by intense hail. Colorado is particularly susceptible and well known for these summer storms due to its geography and high mountainous areas that allow cold air to destabilize warm atmospheric currents. This mixture in the clouds between water droplets and newly formed ice creates a charge that results in lightning. These storms are relatively predictable which allows for planning to stay off of ridges or mountaintops in the afternoons.

Sometimes this is unavoidable as was the case two days ago when climbing up to the ridge of Mount Yale after dinner. Unfortunately, not all thunderstorms occur in the afternoon and we thought we were in the clear after sheltering from a storm earlier in the day. 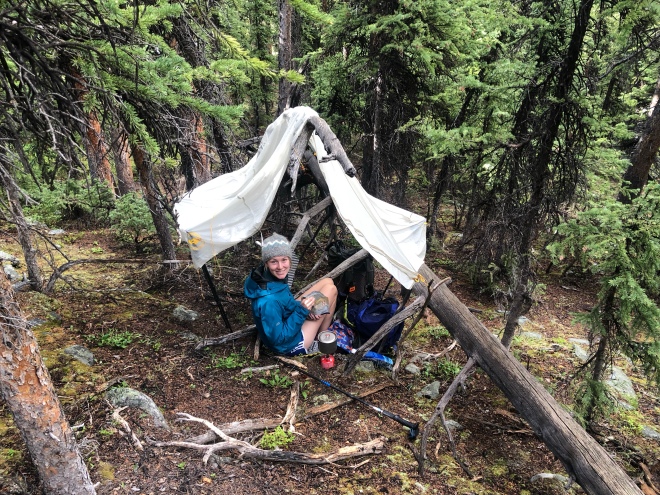 The darkness of the sky increased as we ascended the ridge until finally thunder boomed, lightning flashed, and hail plummeted down in a vicious fashion. We knew our day was over at this point and we were not going to camp up high as originally planned. Given the steepness of our present location, there was not going to be any flat ground to pitch a tent which left only the heart breaking decision to descend some 500 feet to the last known area where we could safely pitch our tent.

This has resulted in very cold mornings, often times hovering just above freezing. A significant contrast to the midday temperatures that often exceed 80F (25C). Pictured somewhere in there is Lucy in the morning before breaking camp.

Some of the camp spots on the Colorado Trail have been the most scenic I’ve had in my life. 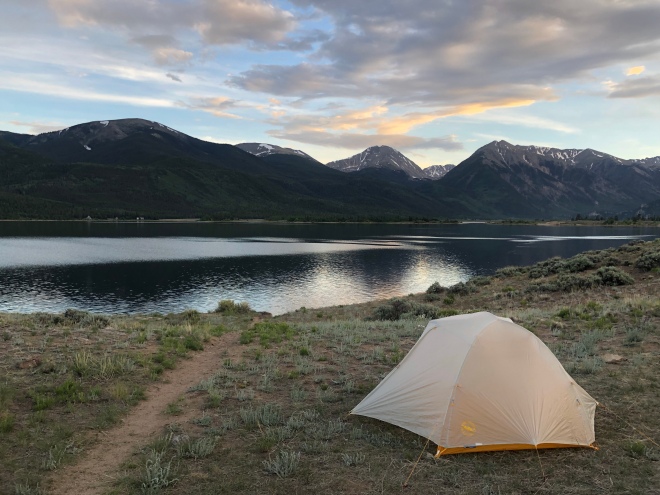 Each morning goes as follows: Wake up. Pretend I haven’t woken up. Work up the courage to take my arms out of the sleeping bag. Put down jacket on. Deflate sleeping pad. Painfully change from leggings back into hiking shorts. Put socks on that haven’t been washed in a week. Get out of tent exhibiting extra care if it was wet overnight so as not to dampen the inside of the tent. Retrieve our food bags hung in the tree. Recoil the bear line. Break down tent. Pack bag. Eat a pop tart. Start hiking. It is the same routine to a certain extent almost every morning but I love it!

After today we will be at the halfway point which is pretty awesome! It’s this conflicting feeling of being very excited to finish but not wanting it to end at the same time. It reminds me of getting into Maine on the AT, which is a similar distance of what we have left to do. I knew that every step forward would bring me closer to the end which was now tangible, but that also meant a return to the real world.

It’s a fairytale land out here. I’m in the mountains everyday, seeing sunsets and wildlife (still no moose), breathing in fresh air, and feeling totally removed from the outside world. There’s a certain guilt that comes with that though. I love not having the news, on the AT I even took pride in it in some sort of Chris McCandless way. I know COVID is still an issue because when we were passing by Copper Mountain, a major ski and mountain bike hub, the village was deserted and everything was closed. This meant however, we had a nice outside table to cook dinner on before continuing on to make camp that night.

But now I just feel like I’m being an irresponsible citizen. I’ve not figured out how to balance this yet, but I will continue to work on it as we enter the latter half of the trail.

4 thoughts on “Snowfields, Marmots, and Thunderstorms”