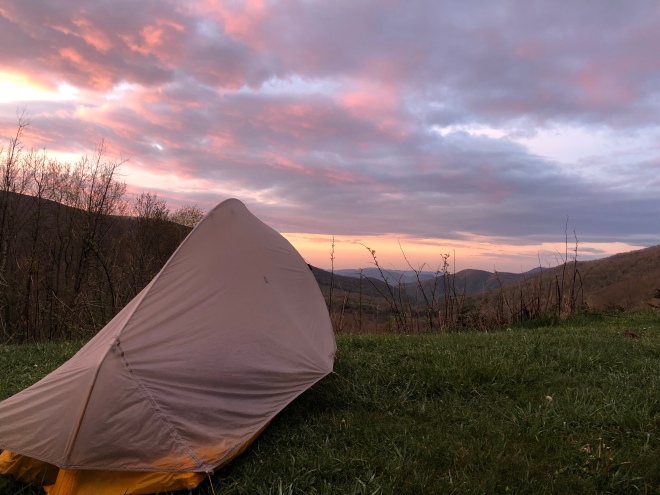 After hiking together for the first few weeks, the trail family has dissipated. Although it was a bunch of fun hiking with a group of people, it’s not conducive when you hike at different paces. We had overlapped for a day in Hot Springs, and I said a hard goodbye. At the start it was good both physically and mentally to be part of a team. I wasn’t hiking as far and as long as I planned and that kept me healthy. Additionally, they were just generally awesome people. For this, I’m sure I’ll be lifelong friends with Kanye, Jack Rabbit, and Red Stripe. But now, I was ready to start hitting some heavy miles.

Heavy miles… in the pouring rain that is. For two days it down-poured on me including one pretty insane thunder and lightning storm.

But on the third day without the crew, I reached my favorite part of the trail: Big Bald Mountain. 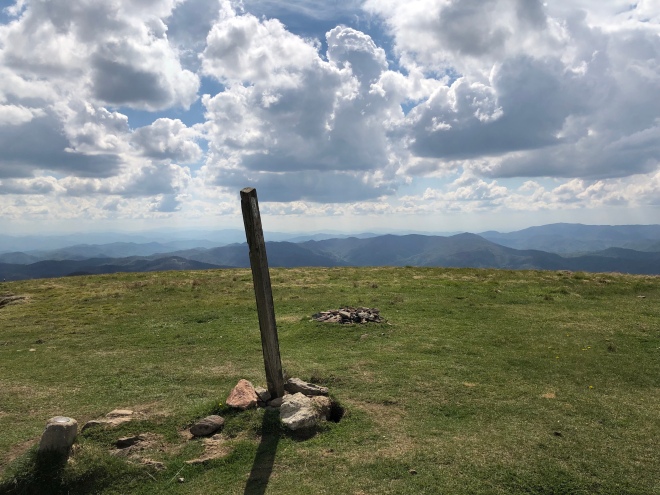 The balds absolutely fascinate me. There’s nothing like them back home. Just 360 degrees of grassy mountaintop. Not the craggy granite peaks I’m used to at home in the White Mountains. Every time I would reach a bald, I stopped, took my shoes off, read, ate, and enjoyed the spectacular panoramic views. Some balds were believed to be created naturally from lightning strikes causing fires on the summit of tall peaks. Others, like Max Patch in North Carolina, were cleared land for cattle to graze on in the summer months.

Big Bald sits at an elevation of around 5500′ which is only 200′ shorter than the second highest peak in NH, Mt. Adams. But they sure look a hell of a lot different from each other 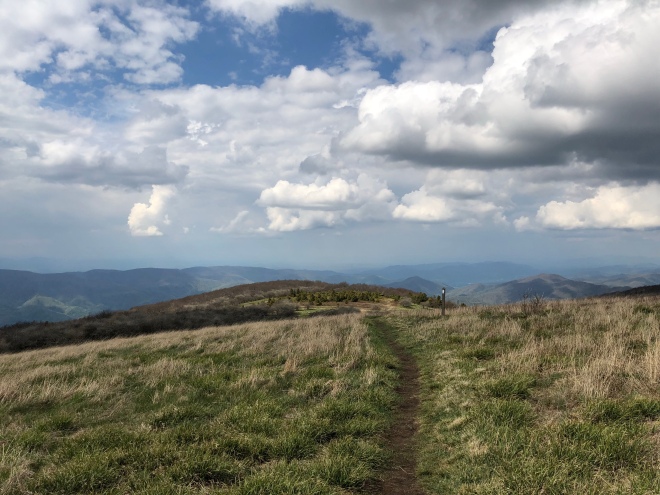 Since being on my own, I’ve realized even the more liberating since of freedom I have each day. There’s no set plan, I don’t have to wait for anyone to wake up, or catch-up; I just go. For as much or as little as I want. This has entirely redefined the concept of freedom for me, mainly because there’s no clock in my life. No manmade constrictive force that binds me to the pressing matters of an ordinary day. I wake up when the sunrises and the birds are singing. Then I walk and eat all day through stunningly beautiful terrain until I’m content with my days work or I simply found an incredible campsite. And lastly, I cook myself dinner and read until it gets dark out around 9PM, otherwise known as, “Hiker Midnight”.

Bill Bryson, author of, A Walk in the Woods, states that,

If there’s one thing that the AT teaches, it is low-level ecstasy– something we could all do with more of in our lives.

The resounding truth that I experience everyday is a constant stimulation of all my senses that transcends their commonly muted presence in the “real world”. However, Bryson also describes hiking the AT as an, “exercise of deprivation”, which is also incredibly factual. This mostly applies to food, and exhibits itself in towns with a phenomenon I call, “perpetual hunger”. When resupplying in Erwin, TN I visited a Mexican restaurant having a Taco Tuesday deal. I ate six tacos, two bowls of chips, drank a 32 oz. margarita, and was STILL hungry. I’ve also managed to lose 4 pounds which is incredible considering I spend the majority of my week eating candy bars, Ritz-Bitz, fruit snacks, tortilla roll-ups, candy bars, and honey buns.

Shortly thereafter, I experienced a day that I can only seem to describe as perfectly imperfect. The night before in my tent, I had planned a 19 mile day up and over Roan Mountain; the last 6000′ peak until returning to NH (a crazy thought). However, the talk of camp that night was a pretty severe storm that was supposed to strike around 2PM. But it was a beautiful morning and dark clouds did not begin to roll in until around noon, even then, the sun was still shining bright.

What followed was slightly more chaotic. If you have never had the pleasure of walking through a thunderstorm on a ridge-line at 6000 feet, boy are you missing out. Just kidding. It sucked. Oh, and it hailed like a son of a bitch, the kind of hail that hurts. This also made me realize that I have no idea how hail actually forms. Additionally, that I could not look it up until I reached a town again; a pretty humbling moment in the realization of how much we rely on technology for information acquisition. 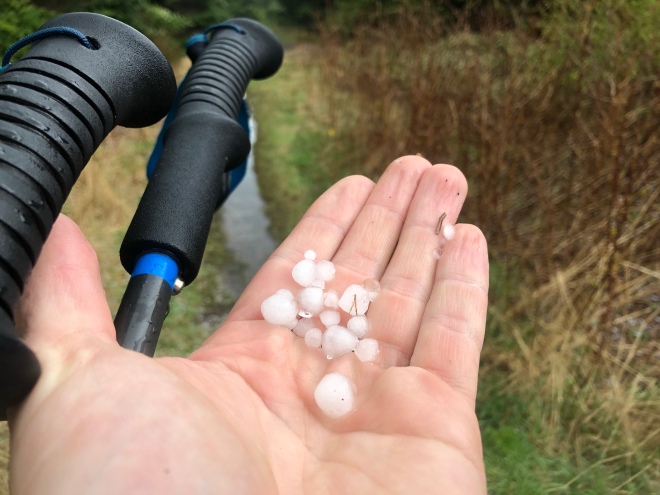 Well science nerds, hail is caused when a growing raindrop is kept from falling by the updraft of a thunderstorm. The raindrop continues to grow until it freezes and hail is created. Finally, the hail falls to the ground when it becomes to heavy for the updraft to hold it up, or when the updraft weakens. See, you learned something more from my blog than how to defend yourself against a mice invasion.

After getting relentlessly battered from the aerial assault and a constant fear of getting zapped into cardiac arrest, I made it the 19 miles to the Roan High Knob Shelter. It’s actually the highest on the AT at 6186′. I dried off, had a snack and gazed amongst the gloomy woods. It was only 2:30 in the afternoon, I could not let this be the end of the day. Cautiously, I opened my map book and studied the terrain ahead. Without overthinking it, I put on my rain gloves, three my jacket back on and hit the trail before I became too sensible. And wouldn’t you know it, the sun came out in all it’s glory just as I was about to pass over a cluster of three of the bald’s I have grown to love so much.

It was a stunning walk that truly made the prior misery worthwhile. 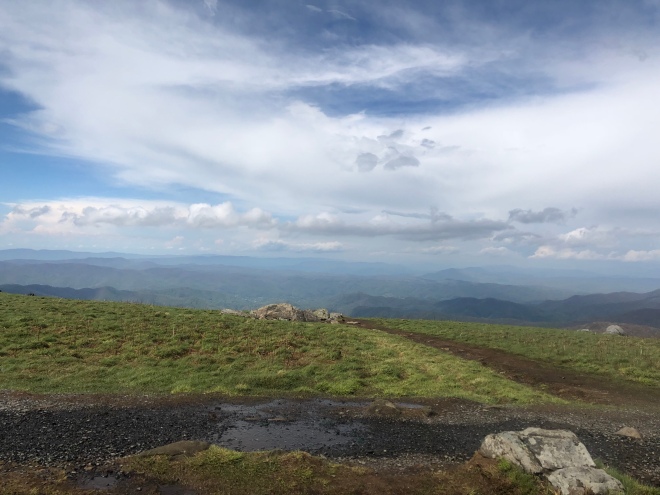 And wouldn’t you know it, I came to Overmountain Shelter, 26.3 miles from where I started in the morning. I just can’t seem to get away from those pesky marathons. Overmountain shelter is especially neat because it is actually a civil war era barn that was converted into a shelter overlooking a gorgeous valley. I set up my tent in a perfect spot for sunrise and cooked my dinner as the daylight faded. 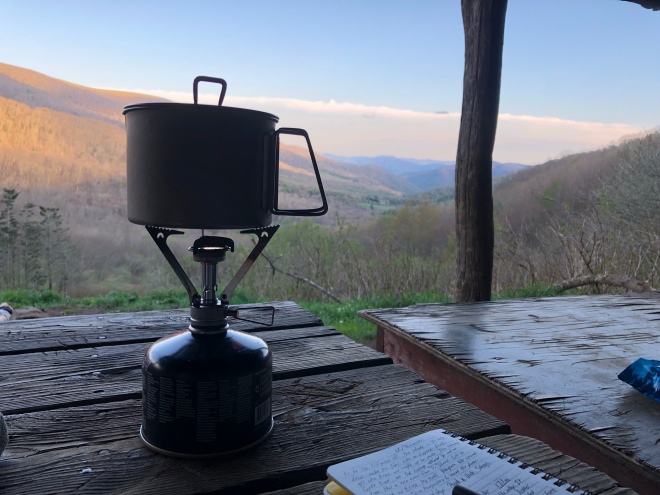 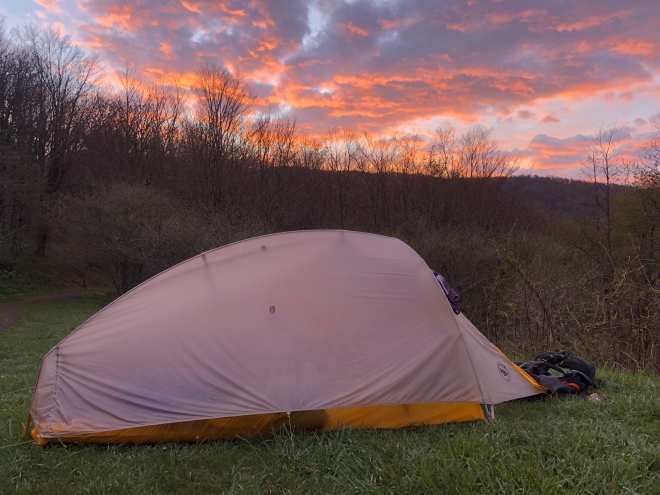 My latest craving for beer, however was satisfied by some absolutely amazing friends that responded to my last blog post. Although they want nothing in return, I’m going to seriously owe them for quenching my desire for a good New England IPA. Thank you to Jo Marczyk, Tom Hammond and Geoff Pinard of Goffstown PD, and Pat Laforge of Goffstown Fire for the epic beer. TRULY, made my day when getting that box in Damascus, VA.

Oh Damascus, where do I begin. Damascus is a small town in the southern part of Virginia, just 2.5 miles beyond the Tennessee border. The claim to fame among hikers is that it is the host of “Trail Days” every May, the major festival of the Appalachian Trail. No matter where hikers are on the trail, they hitch there way North or South to get into town for the event. Hostels and hotels are booked out months and months in advance so a “tent-city” is created housing thousands of hikers in the fields on the outskirts of town. 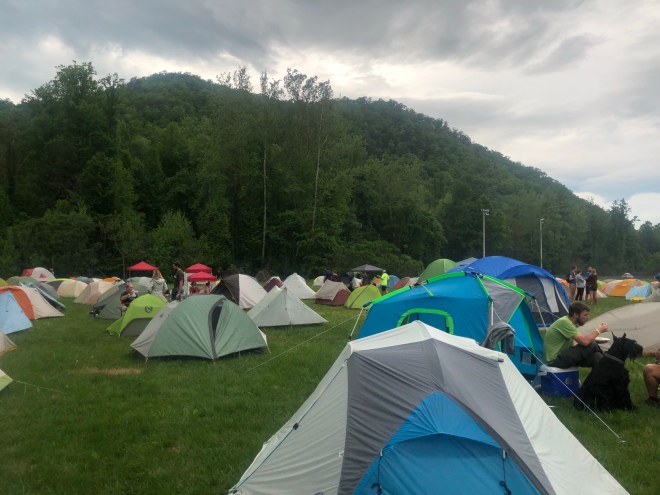 Knowing very well how many people would be hiking out of Damascus the Sunday or Monday after Trail Days, I passed through Damascus on Tuesday and hit the 500 mile mark (wooo!) and went through Grayson Highlands State Park, famous for it’s wild ponies. They loved stealing my food on a snack break. 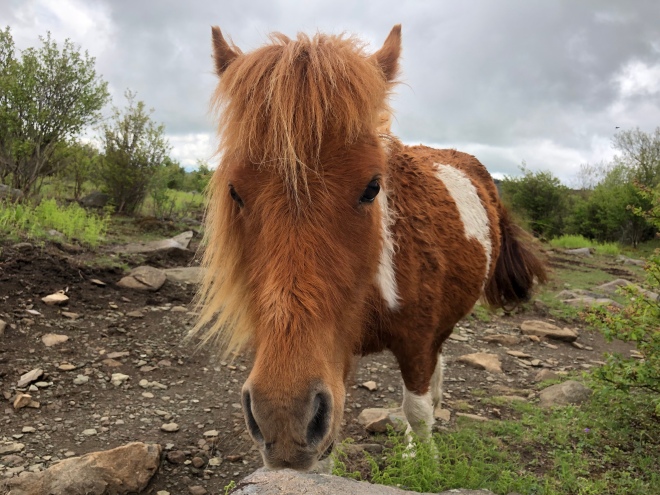 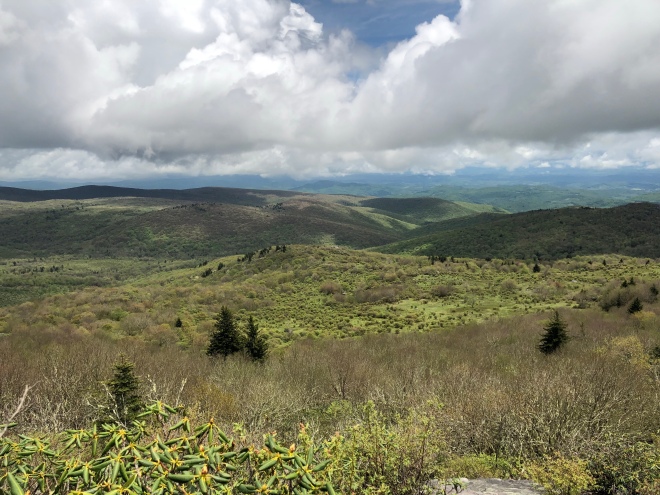 Coming out of two days of downpour and trying to figure out where to hitch from, I stumbled upon a group of guys packing up trail magic at one of the gaps 50 trail miles North of Damascus. They had thru-hiked last year and two of them were from NH! One of the guys was from Manchester and his brother had lived on the same street as me my senior year of college! But they were more than happy to get me out of the rain and drive me back to Damascus, funny how the trail provides…

Lastly, as a tribute to a friend, I just wanted to share a bit of sad news that I received in a phone call from my dad last week. Tom Power, one of my great Irish buddies messaged my father asking him to share the tragic news that our mutual friend, Rich Walklate, had suddenly passed at the young age of 32 in his home in England. Rich or as we affectionately knew him, “The Penguin”, trekked and ran with us through Nepal late last year. He was an unbelievable friend, athlete, and person and will be sorely missed. My thoughts are with his family in these sorrow times.

As my dad told me on the phone, “Tomorrow is guaranteed to no one.” I am reminded of that everyday, and now too realistically with Rich’s untimely death. Apologies for ending on a somber note, but I like to think we can all continue to honor Rich’s memory by enjoying the outdoors and walking in the moment.

10 thoughts on “Trail Days and the End of the Fellowship”