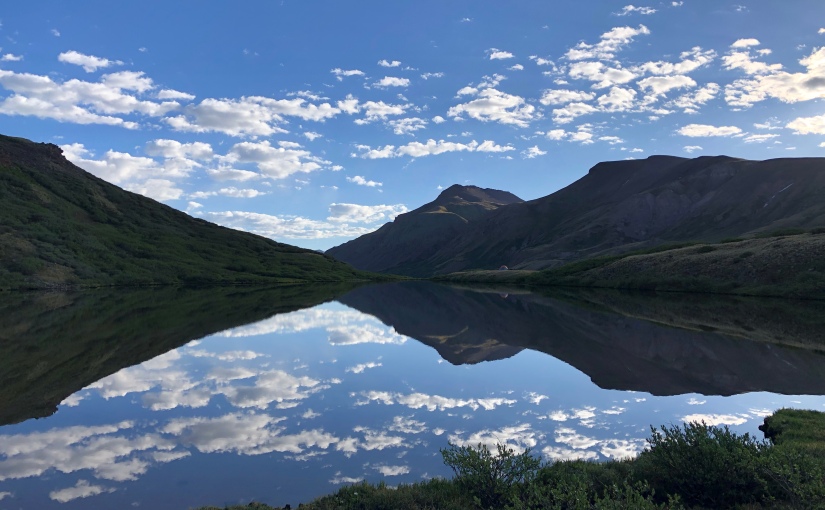 Before I describe the end of the trail and lose your attention, below is a video that I made of our entire hike. It features a few seconds of video from each day of the hike, showing the Colorado Trail in two minutes, I hope you enjoy!

It’s always a bitter sweet feeling ending a trail. 34 days was definitely enough for us to feel integrated into this lifestyle and reminded me of the simplicity of the Appalachian Trail. Now two days post finishing, it feels odd to wake up and not have to break down a tent and focus on where the next water source is. Instead today, it was trying to navigate a busy airport, full of tension between ordinary people some of whom are and others who are not complicit to the pandemic influenced changes. So as excited as we were to finish, I’m also already wishing we had more time on trail.

The last stretch through the San Juan’s was undoubtedly the most scenic of the entire trail. But before we could earn those views, we needed to navigate an amazing amount of avalanche debris in the Weminuche Wilderness area. On four separate occasions we had to carefully clamber across a jungle gym of trees and large boulders that were displaced by the incredible power of avalanches that occurred last year. Since this is a wilderness area, power tools are banned from use in the cleanup of the enormous piles, some of which extend for longer than a football field worth of trail.

After navigating the slew of avalanche debris, my really good friend Jo met us on a zero day in Silverton which is about a two hour drive from where she now lives. Her and her partner Derek took us to a lake for the day where we were able to enjoy some time out in the mountains without having to walk at all, a welcome change for our feet. It was a beautiful sunny day to spend picnicking and catching up in a serene landscape. Lucy and I were so grateful to Jo and Derek for giving us this little and much needed break towards the end of the trail.

The last 80 miles or so are unfortunately full of some very long dry stretches, including a 22 mile gap between water sources. We filled our entire capacity, and knew we were going to have to dry camp that night. However, we got our first bit of on trail “Trail Magic” when we came across a couple who was out car camping for the weekend. Very generously, they offered to top up our water ten miles into this waterless section. I marveled as they removed an enormous water container from their truck and carefully filled our water bottles to the brim. Not only that, they gave us fruit and cans of coke to abate the dryness that had been plaguing our mouthes while we had been rationing water. It may have been the third to last day of the trail, but this was some of the most necessary trail magic I have ever been the recipient of. 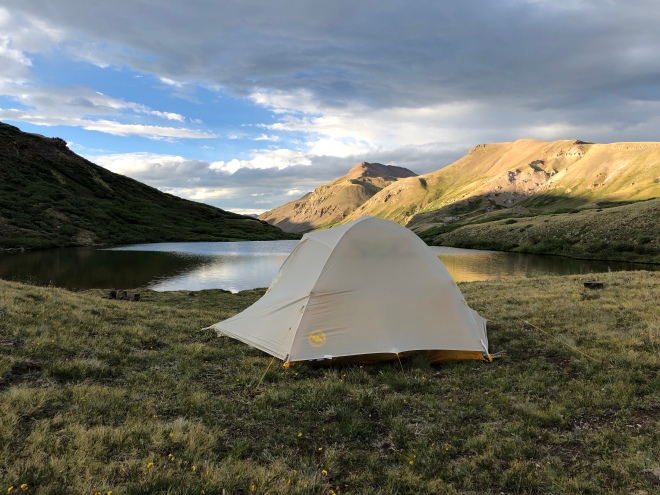 That night, we found a nice camp spot that was relatively sheltered on a plateau between mountains. This area was lacking in trees with branches high or strong enough to hold a bear bag, and since we had not seen a single bear on this hike, we opted to just sleep with our food. I was fast asleep when Lucy was woken up by loud sniffing and snorting on her side of the tent. What sounded like a relatively large black bear was curiously maneuvering his wet muzzle around the outside of the tent searching for any sort of access to our food bags. Thankfully, by the time Lucy woke me up and we moved around on our noisy sleeping pads, the bear became spooked and meandered away into the forest. Certainly a friendly reminder to not become complacent and always store your food properly in the backcountry.

Sadly, the last few days were difficult to enjoy completely due to an intense heat wave and the emergence of biting flies, even at high altitudes. Anytime we would take a break in the shade of a large pine to escape the heat, we were almost instantly assaulted by a considerable amount of flies coming in every direction. So the options were few but to keep pressing on through the heat of the sun.

But up on the ridges the steady stream of wind and some strong gusts were like paradise. The sun was still strong as ever but the convective cooling of our skin made the exposure tolerable, enjoyable even, being so high up in the fresh mountain air. Gazing out over the San Juan’s at the sharp peaks and patches of snow that still hung in the deeper couloirs made me realize how much I did not want this hike to end.

Inevitably, we woke up on the final day of the hike and began to descend into Durango, our first time under 8000 feet in weeks. We had properly left the mountains, so there wasn’t much to see, and I knew the downhill day would just be one for podcasts and reflection. However the excitement peaked when Lucy finally saw her first bear up close. It took until the final hours of this trail, after spending months in the White Mountains and Colorado, but it finally happened. The young cinnamon colored bear was much more spooked then her as he rapidly scampered up a tree out of her way. Not wanting to increase stress on the animal, Lucy quickly continued on. And then just a few hours later, we were at Junction Creek Trailhead, the Southern terminus of the Colorado Trail. A rather hot, dusty, and anticlimactic finish, we found ourselves in a crowded parking lot on a Sunday afternoon after weeks of pristine and remote mountains. After taking the required finish photos we quickly made our way to Durango, out of the heat and to Carver’s Brewery which offers a free pint to every CT finisher. 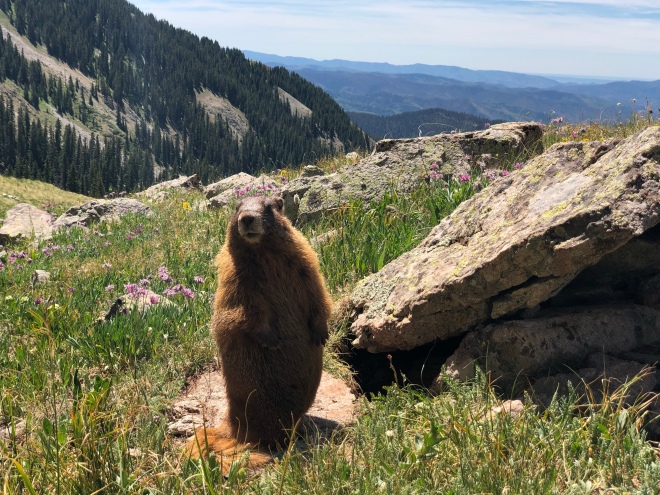 Shortly after showering in our hotel, Jo texted me asking where she might be able to deliver some PBR’s in Durango. The surprise was then amplified when I went to meet her in the parking lot and one of my best friends Brian, who also joined for a week on the AT, popped out from behind a car. He had driven over 6 hours from Utah to meet us! We had a phenomenal night of catching up over beers and margaritas and reminiscing about our Colorado Trail experience. Then a special thanks also to an AT friend, Big Bear, for putting us up close to Denver the night before our flight. Our minimally social hike was now juxtaposed by an ending full of reunions. 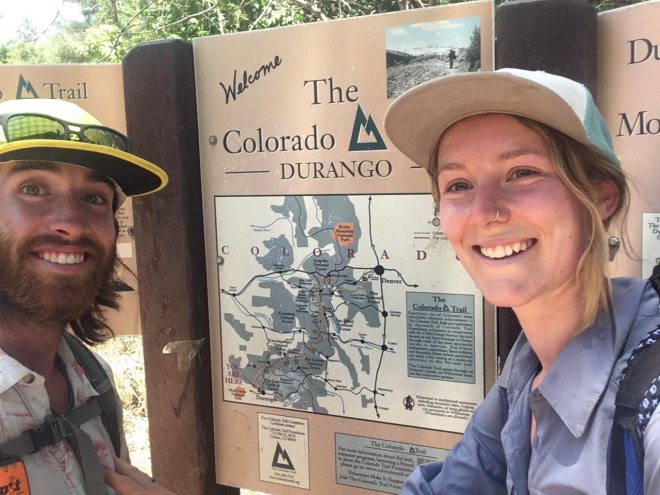 The Colorado Trail was everything that I had hoped it would be. Views and terrain unlike any other I had experienced before, but more importantly the return to living life on trail. Same concept, different place. It’s an interesting lifestyle that as I’ve described before is something I feel conflicted about sometimes. But I’ll always crave being out here, especially once reintegrated into the craziness that is the, “real world” right now. I do think it’s a grass is always greener scenario. And I’m doubtful that I could ever live in the woods full time as much as I love it. A lot of my sanity comes from knowing that I can do it, but also that I have the stability of a job on the other end of it.

Without knowing I could resume a “normal life” after walking a long trail, I don’t think I would enjoy my time in the mountains nearly as much. This balance is something I failed to realize on the AT. After August 2018 I had an amazingly difficult time trying to process returning to work and life. So I delayed it and thankfully had the option to go herd reindeer in Scotland with great friends for the next several months, and ended up building a community and a life there. But in the back of my mind, I knew that as a paramedic, I could always leave at any time and find steady work. This safety blanket was something that I had severely underestimated for the last year. No matter what happened, I always had a backup plan without entirely being consciously aware of it. 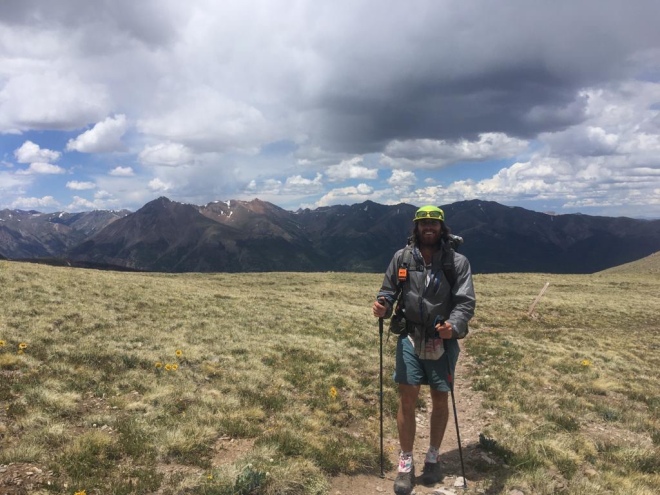 Age is just a number and the only timelines we have in life are ones that we create for ourself. It doesn’t matter when I start school or how long I work for- I am very fortunate to be in a position where I can have a fluid progression of my life. There will always be time for “grown up responsibilities”. And once that starts, it’s more difficult to escape and walk long trails and travel all over the world. I’m not ready to stop yet, and I feel more secure now than ever to make that decision. So stay tuned for another series of blogs from a long trail that will come in September…

Sharing this trip with Lucy has been even better than I could have imagined. Spending everyday with your partner in sometimes challenging environments making difficult decisions in the wilderness could have been taxing- but it wasn’t at all. We worked efficiently as a team and played well off of each other for the entire trail. Whenever one of us was struggling or having a tough day, the other would make it better. I had heard from couples on the AT that hiking with someone you love either really works, or it really really does not. And I feel beyond lucky that for us, it was so effortless, and one of the best adventures I have ever had. Often times I write about it being the people and not the place that can define an experience. On this hike, I had the best company in the whole world.

Thanks so much for following along on this Colorado Trail journey. It has been such an amazing experience from day 1.

10 thoughts on “End of the Colorado Trail”